Recent debates and interventions on security and securitization have highlighted the ways in which security politics and practices generate processes and effects across various geographies, temporalities and sites. Critical security studies scholars have, despite their ‘critical’ outlook, often perpetuated a eurocentric security that fails to adequately reflect on its own knowledge claims and de-politicizing approaches and arguments (Bilgin 2017, Hönke and Müller 2012). As argued by Abboud and colleagues in their call for a Beirut School of critical security studies, these eurocentric approaches continue to construct themselves “through a co-constitutive - although never egalitarian - set of relations between European and non-European worlds” (Abboud et. al. 2018:278). Colonial and imperial histories, it seems, become treated as separated from their continuing legacies which foreground the construction, intervention in, and subjugation of, entire “subregions” to the politics of domination and control by Europe and Anglo-America, as well as non-Western power centres such as China and Russia. In this, albeit ever-changing order, security dominates as a form of global politics and governance, materializing with different intensity across different sites and spaces.

This workshop seeks to explore ‘scenes’ and ‘topologies’ of security as a way intervene in current debates by attempting to explore security through its varying, interconnecting strands that materialize at specific historical and spatial points. Reflecting on the concepts of ‘scene’ and ‘topology’, and their potential contributions to critical security studies, we envisage scenes of security as interconnected and situated through the threads of topologies, enabled by both the specificities of place and time, yet without losing sight of processes that structure such scenes and the ways that they present ‘security’ as a problem. Topology has emerged as an alternative to (post)structuralist and binary approaches in the social sciences, and thus presents a useful point of departure for the workshop. Topological thinking is characterized by a dynamic approach to space which is always considered as being composed of connections, interrelations and alterations (Serres 1981). It thus allows for a relational reading of the dynamic and changing nexus of security politics and practices, and their mise-en-scène, across various geographical contexts and historical epochs.

Combining the concepts of scene and topology, this approach to security politics and practices through postcolonial and postsocialist worlds offers a fruitful way forward from existing debates. Instead of treating the “colonial” or “socialist” past and the postcolonial/postsocialist present as realities that can be researched as distinctive temporal and spatial settings, we propose to apprehend them in their interconnectedness, simultaneity, and epistemological coevalness with western modernity. Following calls for such critical trans-regional/epochal/epistemic inquiry (Abboud et al. 2018, Hönke and Müller 2012, Barkawi and Laffey 2006), we seek to engage with contributions that bring together reflections on how politics and interventions framed around ‘security’ have shaped and continue to shape our geographical imagination, language and the materialization of hierarchies, injustices and insecurities.

In theorizing and inquiring post-socialist/post-colonial topologies, we suggest three themes for the workshop:

Infrastructure and technology: Given the salience of security infrastructures and the securitization of infrastructures as ‘critical infrastructures’, we ask whether postcolonial and postsocialist critiques of the notion of infrastructure can serve to rearticulate and further differentiate critical security studies. In this respect, a particular emphasis is put on technology as part of the agenda of critical security studies, often connecting ‘flat’ ontologies borrowed from ‘Actor Network Theory’ with an analysis of the effects of technological securitization. How can this agenda account for the political trajectory of technologies as they forge, and urge, social, economic, political and cultural relations between the global north and the global south? How can postcolonial and postsocialist perspectives and epistemologies contribute to reassessing the role of technologies and their securitization such as in ‘cyber security’?

Economy and finance: In contemporary critical security studies, the nexus of economy and security is mostly addressed either in the idiom of International Political Economy (IPE) or in works on the intersections of finance and security. While the former debate has been subjected to criticisms regarding its western- and northern-centric epistemological bias, the latter’s discourse mainly focuses on the centres and transnational flows of finance in these same spaces. How can IPE accommodate postcolonial and postsocialist positions and problematics that have so far escaped its analytical gaze? How can the process of ‘securitization’, shuttling between political and financial registers, render itself differently from postcolonial and postsocialist perspectives?

Sociality: Security-related research has increasingly focused on areas and fields of security ‘off the record’ from classical security studies, such as ‘human security’. The rationale of this move was to disentangle the only seemingly self-evident connection between security concerns and state sovereignty or issues of inter-state security. However, ‘human’ security is also an abstraction that casts little light on concrete relationships and forms of sociality within which security related stakes and concerns might emerge – a blank space which is reflected in critical security studies’ tendency to disregard sociality as the relationship base for security concerns and processes of securitization. Here, postcolonial and postsocialist approaches, with their insistence on the materiality and everyday dimensions of sociality, might prove to be a pivotal corrective through the ‘scene’. 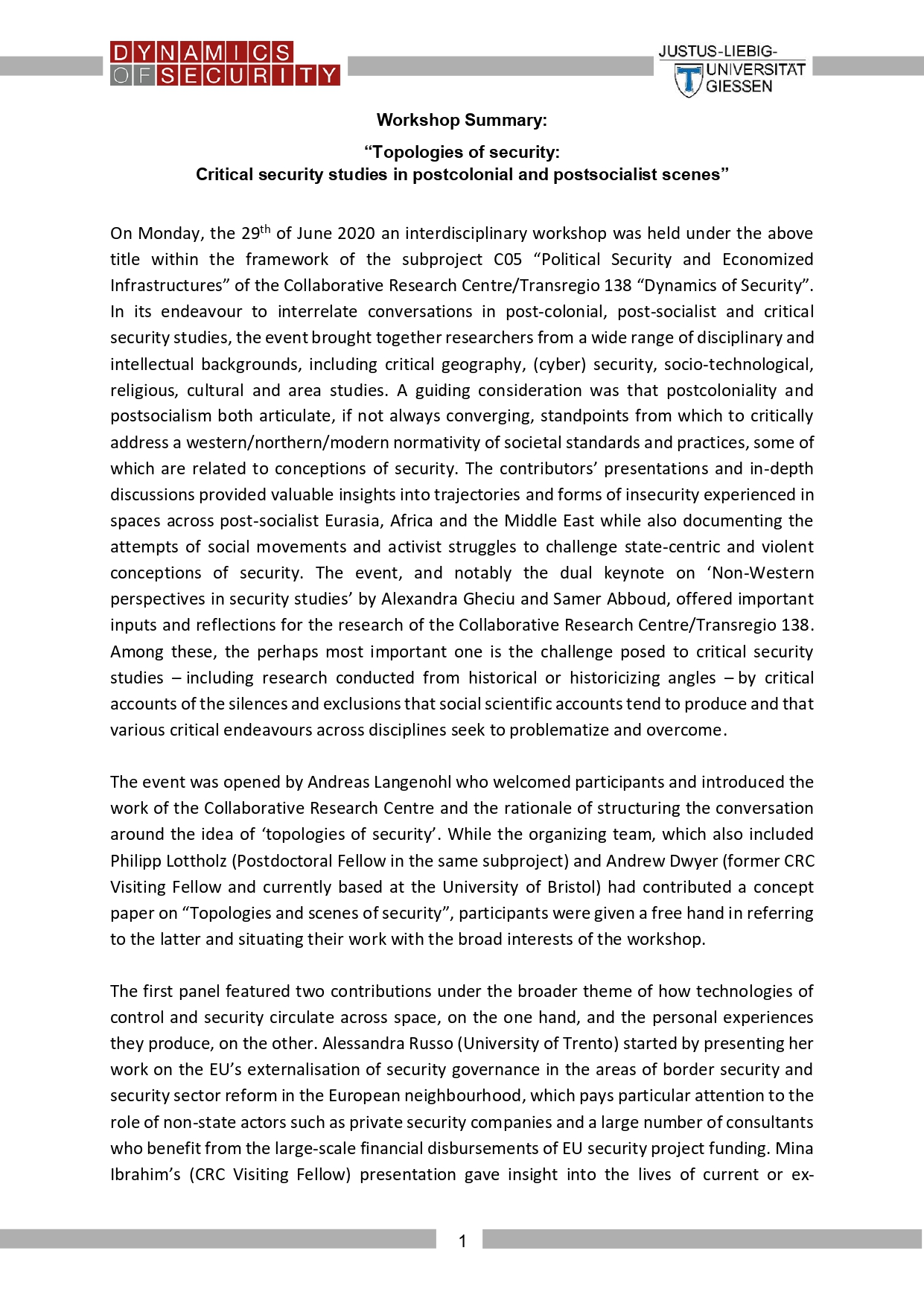 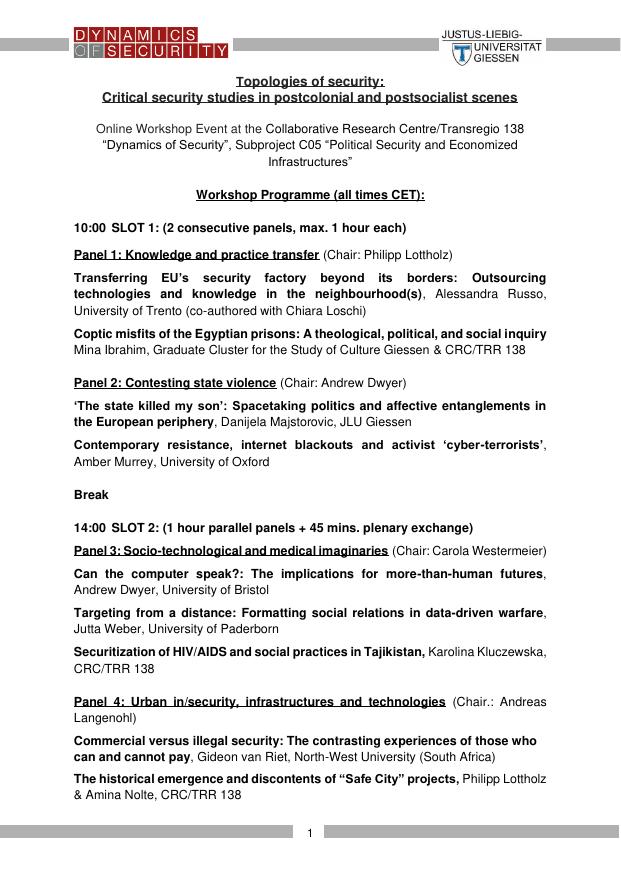 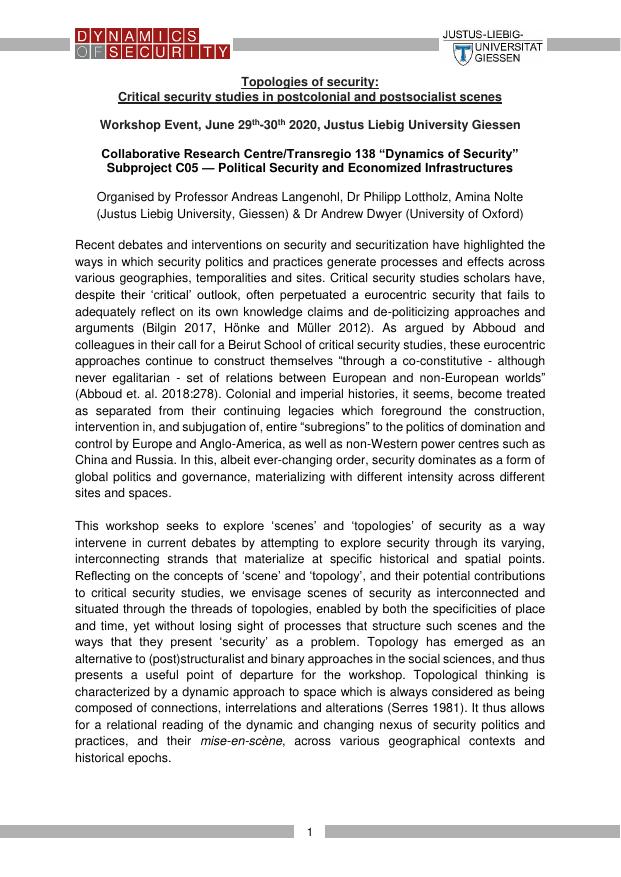